Greek Finance Minister officially declared the country’s “adherence”, “compliance” and “faithfulness” to Greece’s creditors by his apology letter sent to promise  that Tsipras’ government will never give any relief to the poorest of the country without the creditors permission.

But before that , he cleverly chose to show his bravery to the Greek audience- and only- ,  reminding …

Go to  Greek to me ! Newsblog article

Find it also on our Christmas 2016 Home Page

Yianis Varoufakis launched on air today on his personal blog Greece’s official proposals to thte last Eurogroup, urging readers to judge themselves “whether the Greek government’s proposals constitute a basis for agreement”, and answering this way to the “malicious leaks” and misinformation as he said, by plain “transparency ” (and it was not the first time the minister hmself, had to write down the Greece’s truth, word by word)

“The key emergency is to secure a dialogue with adults in the room,” International Monetary Fund Managing Director Christine Lagarde said after listening to Greek Finance Minister Yanis Varoufakis expound in Luxembourg on Thursday. “What we lack is a dialogue.”

According to Brussels’ sources, Lagarde introduced herself on the June 18 eurogroup meeting to Varoufakis saying: “the criminal in chief comes to say hello”, referring to Prime Minister’s speech in Parliament couple of days earlier.

Yianis, can’t be but a gentleman

To make the bitter moments Greece is going through on the last days, a bit juicier, enjoy  the most juicy tweet posted on these 24h on Yianis-Chrisitne “love-or-hate affair”

The only antidote to propaganda and malicious ‘leaks’ is transparency. After so much disinformation on my presentation at the Eurogroup of the Greek government’s position, the only response is to post the precise words uttered within. Read them and judge for yourselves whether the Greek government’s proposals constitute a basis for agreement.

Both parts aiming to a solution of the Greek crisis

Negotiations between Greece and its creditors are progressing  at an accelerated pace and representatives of both sides are expected to convene for a Brussels Group meeting on Tuesday afternoon, a eurozone source said.

The Eurogroup Working Group (EWG) is also expected to meet on Wednesday, sources said.
Earlier, European Commission spokeswoman Annika Breidthardt said that Monday night’s ‘mini-summit’ with German Chancellor Angela Merkel, French President Francois Hollande and the heads of the three institutions representing the creditors – European Commission, ECB and IMF – had evaluated the progress in negotiations between Greek authorities and the institutions, adding that the contacts will continue.

Breidthardt said that Greece’s international partners speak with one voice and that talks are continuing on all levels, while the institutions remain in close contact with Greek authorities in order to complete the negotiations, adding that Monday’s meeting was held in this framework.

European Commission sources said that Angela Merkel and Francois Hollande know very well each side’s “red lines”, following their talks with Greek Prime Minister Alexis Tsipras and the heads of the European Commission, the ECB and the IMF.

Taking these developments into account, it is believed that a plan for a joint agreement will start being drafted in the next few hours , the Athens News Agency wrote

Commission sources noted that Monday’s mini summit meeting was aimed at smoothing out differences between the institutions and forming a common political line. They also said it is possible that a decision will be adopted which will have a medium- rather than a long-term nature, since it will not include final arrangements for the Greek debt.

The Greek government submitted a comprehensive draft agreement running to 47 pages to the institutions representing Greece’s creditors on Monday and is now awaiting their reply, government sources said on Tuesday.

Earlier on Tuesday June 2, the government denied as inaccurate the report of tovima website about the alleged contents of the Greek side’s proposals.
A Greek government non-paper on Tuesday said that no draft agreement has been received from the creditors’ side, nor did the prime minister or other government official had have any contact with the institutions representatives.
Foreign reports, mainly from the German media, said that a draft agreement has been sent to Athens claiming that it is a final proposal, which was not confirmed by the Greek government

PM Tsipras: We have tabled a realistic plan for Greece’s exit from the crisis
“The Greek government is negotiating with a plan and a strategy and has submitted specific proposals,” Prime Minister Alexis Tsipras said on Tuesday during his visit to the Education Ministry and added that “the dilemma concerns now the European leadership, decision lies in the leaders’ hands “

“We are negotiating with a plan and strategy amid difficult conditions. All Greeks know the difference between a government that negotiates and the previous governments that signed whatever they were asked to.
The Greeks should be proud, regardless of the party they belong to. Greece has tabled proposals, we have made concessions – a normal practice in a negotiation – but we have submitted a realistic plan for the country to get out of the crisis. 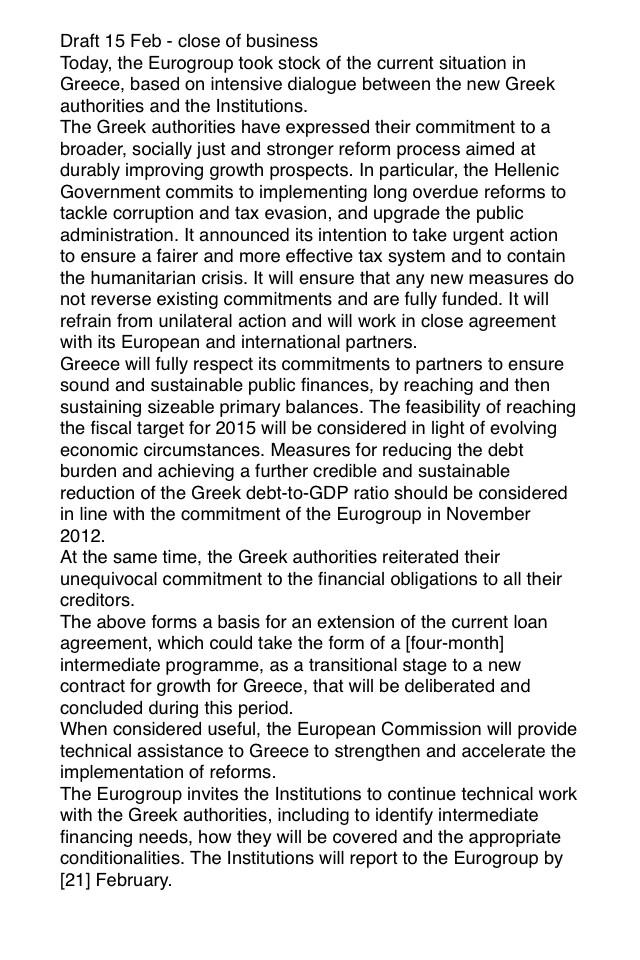