Greek Foreign Minister to Germany: Give us the bribery protocols

Kotzias- Foreign Minister: “In Greece we have major corruption scandals. Perpetrators of these scandals, of Greek identity continuee to live in Germany free.  The German justice should finally give us the protocols of testimonies in order to have the evidence about who was bribed in Greece. Germany cannot argue with pseudo-ethical exhortations and on the same time keep these people that have caused such scandals, like Mr. Christoforakos of Siemens, safely to be located in Germany. This should be stopped. The German justice must notify us of their deposits. We are a government who fights corruption, and also the wealth obtained by corruption methods. Germany should stop hiding such swindler. “

Before his election  Alexis Tsipras had warned the German justice that the Siemens scandal should be brought before the courts by his government . And , voila, what a coincidence: The key person for the revelation of the scandal, Heinz-Joachim Neuburger, former chief financial officer of Siemens,”commited suicide” some days after the new governmenet’s election in Greece, a suicide shrouded in mystery, as the international press mentioned.The German press, for the most part has said that he was found dead at his home without clarifying how the suicide took place. Those close to Neuburger are puzzled by the suicide because he had recently settled a lawsuit filed against him by the company on bribery charges. He had been found guilty of paying bribes to procure contracts in foreign countries, including Greece. Despite charges, Neuburger insisted on his innocence until the end.  He contested that he had failed to combat corruption in the company. For this reason, he was the last of nine former executives to reach a settlement that called him to pay 2.5 million euros (less than what Siemens owed him in pension payments and other compensations). The settlement had been approved at a January 27 annual meeting.

Keeping its promises Greek governement of Alexis Tsipras sends  64 suspects to trial for SIEMENS/OTE €70m bribes scandal; among them 13 Germans

Ten years after the discovery of the scandal and judges have finally took the decision to refer 64 suspects to stand trial over bribes paid by German giant SIEMENS to secure a public contract. Among the 64 suspects are 13 German nationals, executives of the parent company. According to the judges decision SIEMENS has allegedly paid bribes of estimated €70 million to secure a contract and digitize the network of then Greek Public Telecommunications System OTE. The contract “Convention 8002″ was signed in 1997. Among the suspects is also the former powerful man of SIEMENS HELLAS Michalis Christoforakos, who escaped to Germany and authorities there refused to extradite him to Greece’s previous requests. The 13 German names mentioned refer to former executives of the parent company and former executives of OTE. The charges refer to “money laundering”, “active and passive bribery” and “accomplishment to such actions.” Theodoros Tsoukatos, the former consultant of former Prime Minister Kostas Simitis, is also on the suspects’ list. “Tsoukatos appears to have distributed 1 million Deustche Mark and has maintained that the funds ended up in PASOK’s accounts.”* Others suspects  include top officers of the Siemens’ Greek subsidiary, as well as German nationals who are said to have approved payments and bribes to Greece. In their decision, the judges acquit 80 people of the charges. In November 2014, the Financial prosecutor had sent his 2,368-page report to a council of judges to make the final decision on whether the suspects should stand trial over the so-called Contract 8002, for Siemens to digitize OTE telecom’s network.

The suspects are said to include 19 Siemens and 14 OTE telecom executives.

It is alleged that nearly 70 million euros in bribes were paid to secure the deal. The only Greek politician who has been convicted in connection with the scandal is ex-Transport Minister Tasos Mantelis, who was given a three-year suspended prison sentence in 2011 after being found to have accepted payments of 450,000 Deutsche Marks (230,000 euros) from Siemens between 1998 and 2000. 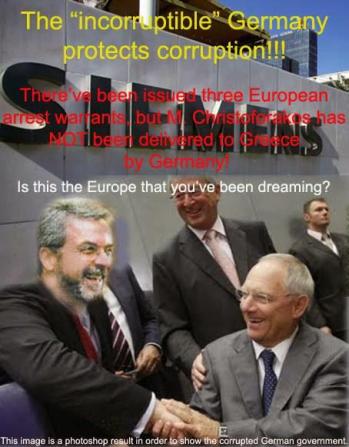