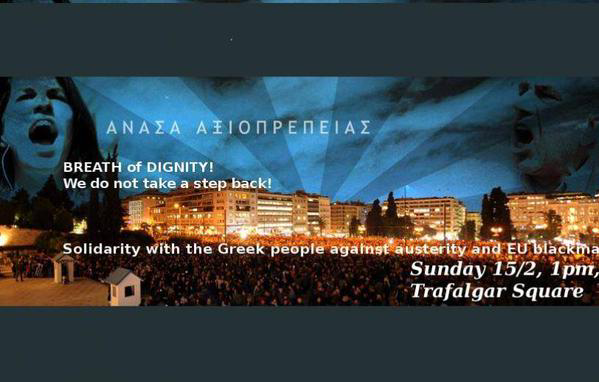 In Rome, thousands of Italians marched on Saturday calling on the Eurozone to “Give Greece a Chance”.

Angela Merkel’s conservatives in Hamburg, on Sunday, we underline, suffered the worst election result since WWII Anti-euro Alternative for Germany (AfD) party looked set to win its first seats in a regional assembly in west of the country, by the CDU loss of 22 percentage points in the election – one of its worst ever regional results. Looking more closely,

Greece, Ireland, Spain, Italy and Hungary were the EU member states where poverty and social exclusion increased the most during the economic crisis, according to the European Commission’s Annual Review on employment and social developments in 2014

As regards Greece, in particular,

Greece, by the way, according to a  Parliamentary Budget Office report, is the only EU country not to have implemented a guaranteed minimum income and is among the most sluggish in adopting programmes to address social inequality and aid citizens living in extreme poverty and social exclusion,

This is despite the fact that six in ten citizens are living in or at risk of poverty, the PBO report (pdf) said.

“The demand for social responsibility on the part of citizens is pronounced but what the state offers is characterized by fragmentation and administrative problems.

Thus the social safety net is characterized by inefficiency, while at the same time there are no expectations that income loss due to the economic downturn will be replenished in the near future,” the report  had stated, back in September 2014, when Samaras’ government was reigning

But the thriving Tsipras election since then,  changed a lot, yet in his first 20 days in government: expectations, the pubic feeling and much of the reality the austerity on pro and anti-austerity playgrounds
In southern Europe, popular opposition has been mounting against the fiscal austerity measures demanded by Germany.

” Tsipras government gives other leaders, particularly Renzi and Hollande, strong support in their negotiations with [German Chancellor Angela] Merkel to loosen the purse strings,” explained Luca Fantacci, an economist and the author of Saving the Market from Capitalism. “And this is beneficial not only for Greece, but for the whole eurozone – which is being choked by austerity.“

Since last November, both Italy and France have been pushing EU institutions for fiscal expansion. Meanwhile, both countries have been breaching the eurozone’s Growth and Stability Pact, which requires member countries to keep budget deficits below 3 percent of their GDP.
“In strictly economic terms, there is a widely shared view that expansionary fiscal policies are in the interest not only of Greece, but of Europe as a whole,” Fantacci said.

“The problem [for Italy and others] is how to make them politically viable. It shows that the current form of the monetary union is untenable.” According to the European Commission review, in Greece, Spain, France and Italy the percentage of the transition from part-time to permanent job status was among the lowest in the EU during the economic crisis, while in Greece and Portugal, 25 pct of the people working part-time within a year were jobless or inactive.

Participation in education was a victim of the economic crisis, according to the European Commission, which in certain countries remained unchanged during the crisis (Greece, Italy, Romania, Czech Republic, Slovakia) or was reduced (Poland, Hungary).

One thought on “Alexis, change it all! Tsipras phenomenon chokes the German austerity, which “is chocking the eurozone””