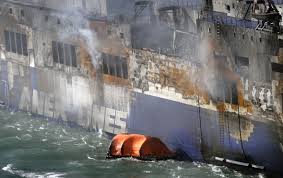 Who was Who on that Ferry? Who are those still missing from each country? Whose “flesh” is still burning on that floating hell after almost two weeks, and who is going to honestly inform the public for the macabre marine casualty?

Italian prosecutor Giuseppe Volpe, who is in Italy investigating the tragedy, said 98 people were unaccounted for after the disaster.
He said: “There are 98 people of whom there is still no news.”

Who are those people? Why nobody is talking for them?

In Greece , the story is by the media systematically played down, as the press is being intensively absorbed by the pre-election polarity .The stories of the survivors as they came alive from the elusive tragedy are being played down, and the latest days, the ferry story may not even appar on the news, fading out in the Greek public opinion .

But we are talking…